Makena Sands had the perfect life, great job and the man every woman dreamed about. Until it all crumbled. To feel safe and stable again she returns home to lick her wounds. Only to find no one gives a damn about everything she’s accomplished in Chicago. To many of then, she’s still Pastor Sands’ daughter and one who left without a word like a thief in the night. For shame! Needing to drown her sorrows with tequila, Makena does the walk of shame home after a night with Sheriff Carter Rome. A man eight years her junior, a man she babysat for and tutored. A man who should not be attracted to her if he knows what’s good for him! There was another tiny problem, one that popped up a weeks later- a plus line on a pregnancy test. Damn it. How can they possibly have a future? Would he really want to be tied down to her who would now be the town cougar AND a baby?

Carter Rome is a man and one who knows exactly what he wants; Makena Sands. He’s determined to make her forget all about her ex and her troubles even if he has to kiss her sorrows out of her but she keeps avoiding him! When she drops the daddy bombshell he is willing to do anything he can to step up. He always wanted to be a father and his only goal to care for them both. But she refuses to believe him, stubborn woman. Who cares about the gossip or the age difference? He knows with every fiber of his being they can make it work. Come hell or high water he’s going to show her that he can be everything she needs. Age difference be damned and to hell with anyone that gets in his way. Even when that chaos of her father’s old congregation rears is ugly head. Carter would climb into hell to make sure she and his baby were safe…. He just might have to.

Be the first to review “Bringing Up Mommy” Cancel reply 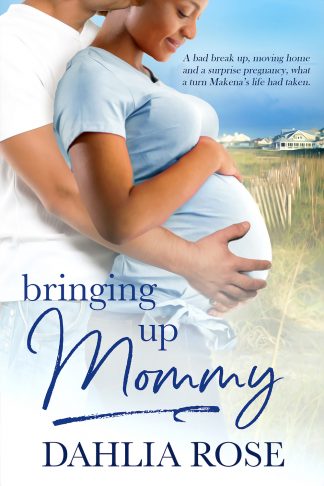 You're viewing: Bringing Up Mommy $3.99
Add to cart