Within the pages of this book you will find the complete ‘My Daddy is a Hero Series.” Love found these single dads as they navigate fatherhood while balancing it with honor and their service to their country.

Master Chief Marrone.
Two weeks before leaving Afghanistan and retirement, Master Chief Fabian Marrone got news that froze his heart with fear. His two-year-old daughter Caelynn had been taken by his ex who ran off with their child. He’d left his daughter with the only person he could trust with his life, his best friend Taryn Nevin. When they found her, Fabian began to see Taryn through new eyes filled with desire, passion, and lust. Would taking their relationship to a new level enhance what they already had, or would he be left without her as a lover and friend?

First Lieutenant Cutter
David Cutter was on his way home to surprise his children. He’d lost his wife to a tragic accident leaving him a single father to twins. They both spoke of their teacher Ms. Noelle Cherise often and with his mother’s help he contacted her with help for his plan. Who knew that their teacher was such a beautiful woman with gorgeous almond eyes. When David met her, he found his interest was in more than his kids’ education. On impulse he asked her out on a date, and after the first kiss, he knew there was no way he could ever walk away. David hopes with all his might that she can weather the storm with him because losing her would destroy him all over again.

Gunny Sargent Brooks
Lies caused Aidan turn away from the connection he made with Cherish Walker. Their one nightstand that was filled ecstasy and need like he never knew ended with his friend ruining it all. It seemed that it culminated in something else as well because when Cherish finally reached him, she was three months pregnant. When the truth finally came out, Aidan rushed home just in time to see the birth of his son and the betrayal in Cherish’s eyes. Trying to be a new father and make amends for his mistakes was the hardest mission of his life. He loved the woman who gave him the gift of a child. Working his way back into her life might not happen if she never trusted him again.

Captain Brevard
Simon loved the Air Force and flying fighter jets, until his world was turned upside down. His sister and her husband were killed in a car accident, and now he was the guardian to his one year old niece, Emma. While dealing with the grief of losing the only family he had, he was determined to make sure that Emma would lack for nothing, including love. In the midst of all the changes in his life, there was Leila Hayes, Emma’s pediatrician and his sister’s close friend. Simon never knew love before he met Leila, and when he finds out the secret that she kept. It could join them together as a family or break them apart.

LCDR Latos
Chase was one of the elite in the Air Force Pararescue Unit or the PJs. His job fed his love of country and the honor that was instilled within him, but his fifteen-month-old daughter Ava was his life. One night there was a knock on the door and on the other side was Amber’s bestfriend, Violet White. Chase was drawn to her and the attraction was sealed with the first kiss they shared. How could she be the perfect fit for them when she had no clue about military life or babies for that matter? There was more at stake than his need and the passion they shared, there was Ava.

Be the first to review “Daddies In Uniform” Cancel reply 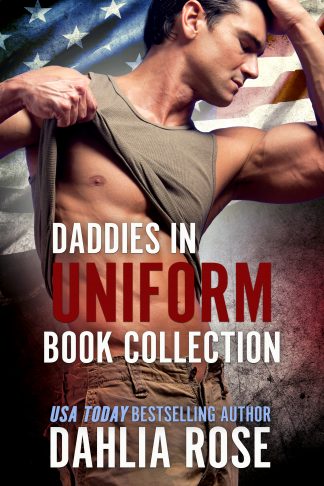 You're viewing: Daddies In Uniform $9.99
Add to cart