Duty. Honor. Service. Three words Colonel Deacon Hassel embodies to the marrow of his bones. His life holds no room for anything else—until the night fate decides otherwise… Pregnant, scared and in the middle of a late in the season storm, neither of them counted on was her going into labor on base and Deacon having to deliver the baby… Sergeant Dionne Holliday has no choice but to entrust her life and the life of her baby in Deacon’s capable hands. No matter how hard he tries, Deacon can’t get Dionne or her baby out of his mind… and worse, his heart.

When a complaint against Dionne’s abusive ex comes across his desk, his protective instincts kick into overdrive. His most important mission? Ensure the safety of the two people who are slowly becoming the world to him. Innocent visits become so much more as desire and temptation collides. The touch of Dionne’s skin, kissing her—how can something that feels so right, be wrong? Being with her breaks the rules, endangers his career. But walking away isn’t an option. Not when the two people who mean everything to him have their very survival on the line.

Be the first to review “Deacon’s Downfall” Cancel reply 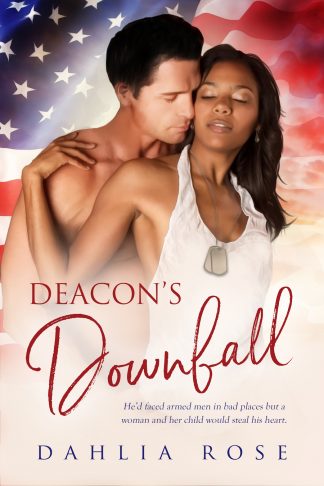