Grace Kyle fell in love and fell in love hard for an older sexy soldier. Even though she knew it was a bad idea. She was part of the group sending humanitarian aide out Ecuador after a brutal storm and mudslide. Grace met him on base in Lawton Oklahoma and it was a hot and heavy month long affair with Major Oliver Mason. “Its been fun Grace, but we knew this didn’t have a future…” she didn’t hear the rest of his words because his words broke her heart. Pride made her turn on her heels and leave before he saw her tears and she went back to Eugene Oregon with a broken heart and a vow to forget him.

One year later as the holidays approached, a knock on her door brought all those memories to life. Oliver stood at her doorstep, handsome as sin in his uniform with his hat in his hands. He begged her to forgive him, she was the only thing the thought about in the last year and he tried like hell to find her. But it fell on deaf ears because Grace vowed never to be hurt again by anyone. The sweet woman he fell for was gone, she buried that naivety and while he vowed he’d put in the work to win her back. She promised him and herself she would thwart his effort. But his kisses still made her sizzle and the passion they shared never dulled. Now she was the one saying it was for fun and games, except now there may be something that connects them forever. It would be a labor of love to win her back and Oliver was not one to step away from a challenge.

Be the first to review “Fall From Grace” Cancel reply 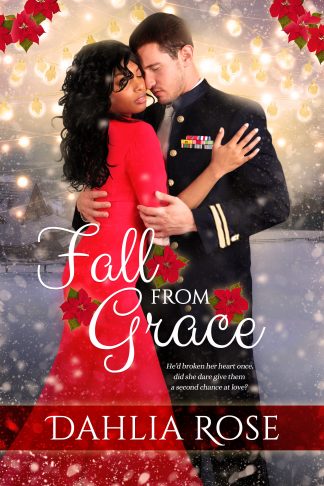