Kryslyn Dale’s passion was exploring the world and her dream trip finally came to pass. She would traverse the Frostisen Glacier in Norway. The people of Narvik warned her about being out in the wilderness and away from town alone. But as Kryslyn stared up at the Aurora Borealis, there was nowhere she would rather be. The sound of breaking trees and the vibration of the earth woke her and as she scrambled out of her tent expecting to see part of the glacier breaking away. Instead she was face to face with a frost blue dragon. The beast of myth took her in its claws and her scream was lost in the wind. Another surprise came in the dragon’s lair when the mystical creature morphed into a man unabashedly and gloriously naked.

Torbjorn Kristoffer thought she was sent to hunt him but soon he figured out she wasn’t a threat. There was no way she was leaving this adventure of a lifetime, seeing the world through a dragon’s eyes. Never one to doubt her instincts, Kryslyn gave into temptation and with only four weeks in Norway, she planned to leave with memories of being in the arms of the man who changed into a beast of legend. The desire he created as they found kismet with each other would be put in jeopardy when Tor’s true enemy surfaced. Kryslyn was caught between a force of nature and the madman who wanted the ultimate prize, the last ice dragon. Tor claimed her as his mate and vowed to protect her. Kryslyn would see the glacier melt into the sea before she would let her dragon be caged. In the end she may end up being his only salvation.

Be the first to review “Hot As Ice” Cancel reply 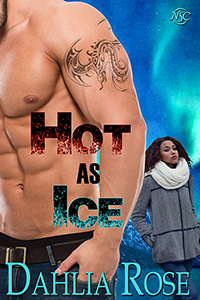