Larkin Day knew how to be a good cop. On the streets of New York, you had to pick your battles. She helped those she could and sometimes had to walk away from those who didn’t want to save themselves. It was a harsh life, but she loved the city and thought she knew it all. What she didn’t expect was to be trapped on a rooftop with a snarling beast. It killed her partner, and now she was its next intended target. She didn’t dare open her eyes even when a deep kind voice told her she was safe. Larkin’s life was turned upside down. She was in a world where monsters were real. Werewolves existed and were hunting in New York.

Her savior showed up that same night to her apartment to let her know that she was still in danger and he was there to help her. Keaton Knight was built like a tree trunk and was as gorgeous as hell. The first kiss he gave her was only the beginning. Each touch made her burn hotter for the man who held two natures in one body. Now with him and his team, they hunted the things that tried to ravage their city, that took her partner. With danger at every turn, Larkin found something worth holding on to–Keaton Knight, a man who could become a wolf and who called her his mate.

Be the first to review “Night and Day” Cancel reply 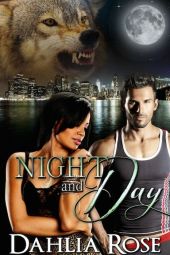