Meet Aurora Cosme, a New Orleans resident and aura reader. After being hit by lightning and dying a few times she came back to life, changed. Aurora is light sensitive, she has the sight and she talks to ghosts. One happens to be her bestfriend Madame Laveau aka Lovie. Don’t ask how that friendship happened. She reads auras and tea-leaves in the parlor of her three story Victorian house in the 4th ward of New Orleans. But compared to the fact that she could be in the great beyond by now, Aurora counted herself as lucky.

A young woman named Lenore Dash stepped into her parlor and aura was as bright as her personality. Her story was, she was about to die and in Aurora house mind you. In that white aura, she saw the outline of angel wings and then a dark entity took her, one from long ago. It was time to don one of her designer sunglasses and clear her name. There was one additional problem, FBI agent Andrew Garrett. The Boston born officer of the law didn’t believe in the things that went on in New Orleans or Aurora. The fact that Lovie didn’t like him and their growing attraction, well that was three problems, wasn’t it? Blast it! She’d find away to help the young woman even though her beautiful light was snuffed out and the other problems would have to solve themselves.

Be the first to review “Death Came To Dinner” Cancel reply 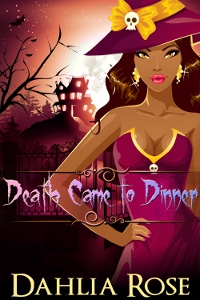 You're viewing: Death Came To Dinner $4.99
Add to cart