A city boy born and bred, Dr. Ray Solomon is used to living life large. So naturally fate would decide to pull an ironic twist and land Ray as the resident doc in Westerly, North Carolina—the smallest town on earth. According to the locals, Westerly’s biggest claim to fame is a mysterious and mystical geological anomaly that spells imminent love for anyone who enters the town limits. Sounds like they’ve all been drinking way too much margaritas, but when you live in a one-horse town permanently stuck in a time warp you’ve gotta find something to amuse yourself. And no joke on the time warp thing. Seriously, it’ll be a damn miracle if his car doesn’t transform into a DeLorean. Working at the postage-stamp-sized Veteran’s Hospital is a challenge, but the biggest test of all? Keeping his hands and thoughts to himself when it comes to Fayth Collins—the sexy nurse with soft chocolate eyes and a body made for all things fantasy. Especially his.

Spitfire Fayth isn’t one to swoon over a man with big city charm. Not even one as gorgeous as Ray. No, he’ll have to put in plenty of sweat equity to win her heart. Oh, and one other little thing. She’s a package deal. In other words, Ray has to contend with her entire extended family– that just happen to live with her. Privacy? Hell, none of her roomies know the meaning of the word. Despite her making it clear they have no future, He refuses to take the hint. Ray would have to be crazy to pursue Fayth with the mountain of obstacles facing him, but he suddenly has an insatiable thirst only she can quench. They say people who are meant to be in Westerly never leaves. Because it looks like Ray is about to be its next victim… 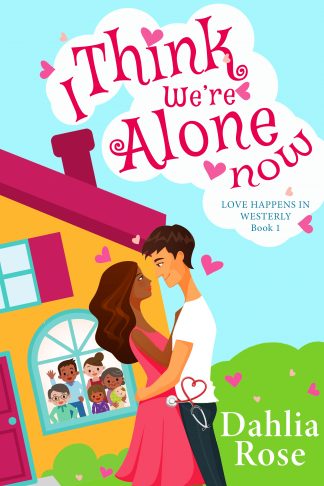 You're viewing: I Think We’re Alone Now (Love Happens In Westerly Book One) $2.99
Add to cart