View cart “Stalemate” has been added to your cart.

The Duke Takes a Wife

Jasper McTavish, Tenth Duke of Northumberland, blah, blah, blah, he hated the pomp and pageantry of having the title of Duke. He liked wood crafting for his profitable business, and he liked his peace. But when he was forced to perform his diplomatic duties, he did it and longed for the evening to end. Except this time his uncle was with him and they expected him to fulfill another part of his lineage, marry someone they deemed suitable. So, when he met the military attaché to the White House. He was intrigued and definitely smitten by the smart crisp Sergeant Zeva Troy. A plan formed in his mind, Jasper knew if this duke were to take a wife, it would be her. He had five days in Washington D. C to convince her to marry and to go home with him. But his smooth accent, anything he owned. nor his title, definitely did not impress Zeva. Yet after a few steamy kisses and his offer. Zeva accepted and a new adventure began for both of them. Now they had to worry about his family who had no problem playing dirty.

The horrors Lord Haile Buchanan witnessed while serving in the British Army left scars branded into his soul. Survival dictates relegating those harrowing memories to the past. These days, he lives a quiet life running his Northumberland pub with few people knowing his title or his past. It’s more than enough excitement to keep him occupied and out of trouble—until he glimpses the stunning beauty sobbing beneath the awning of Hope Center. Common sense demands she’s not his burden to bear. Honor and decency refuses to let him walk away. He gave her a job and a place to stay, The one drawback? Being around her is stirring emotions he never expected to feel. Their chemistry is explosive and getting harder and harder to deny—for both of them. Just as the walls around their hearts begin to crumble, Mari’s past and a dangerous enemy threaten to destroy everything. Protecting her is Haile’s only mission—even if it means summoning his own past demons.

The Bride of Mackenzie Black

Mackenzie “The Bruiser” Black ran away to get out from under the dark cloud that hung over his life and from his two titled best friends. Growing up as “the boy from the docks” left him with a chip on his shoulder the size of the Cliffs of Dover. He found success in DC, but home kept calling him until he couldn’t ignore it anymore. He thought he could deal with everything and get the hell out of dodge until Nina, Haile’s new tenant. Among the Christmas lights and cozy fires, she was a breath a fresh air. Sweet smiles from her led to passionate, heated kisses that could help a man forget old wounds. But he couldn’t stay. Wouldn’t stay. Unfortunately, his past comes call and Nina gets caught in the middle. Mac has no choice but to resurrect The Bruiser once more.

Be the first to review “Not Just Royals Trilogy” Cancel reply 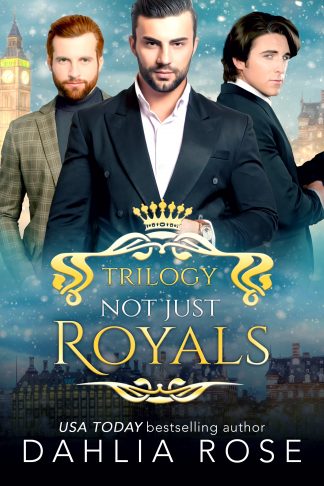 You're viewing: Not Just Royals Trilogy $9.99
Add to cart